Gellin & Borgstrom with flowers and gifts. 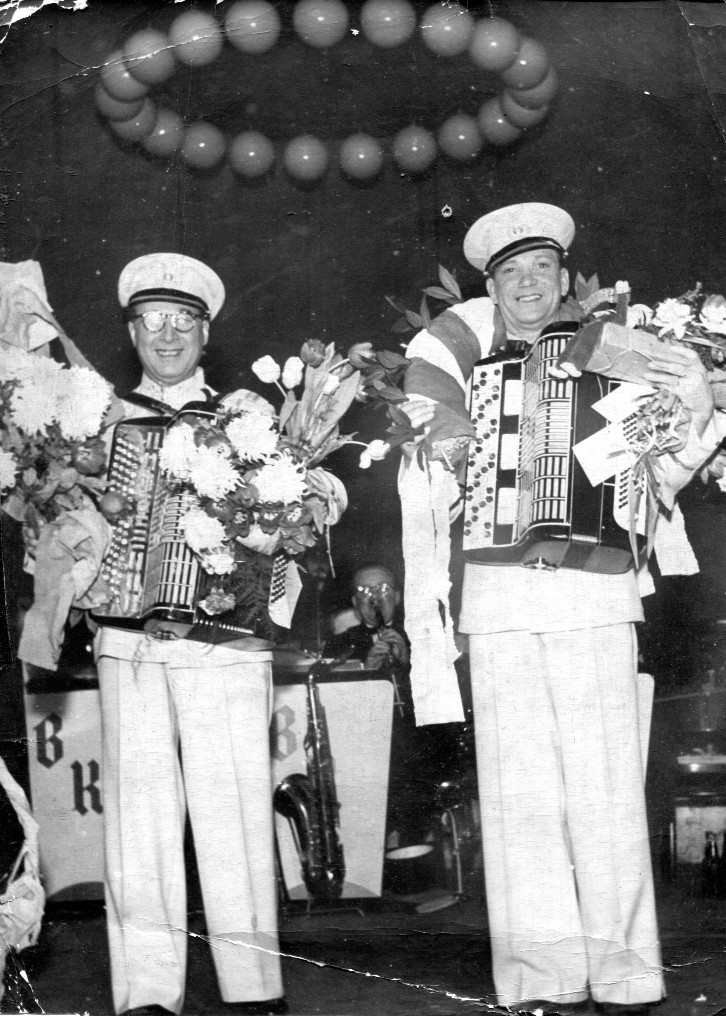 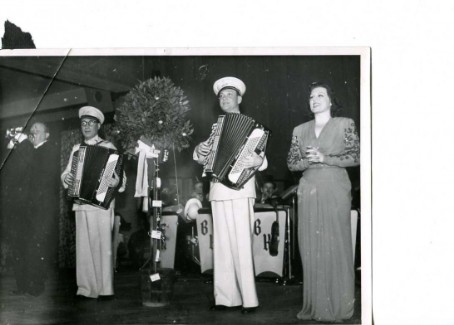 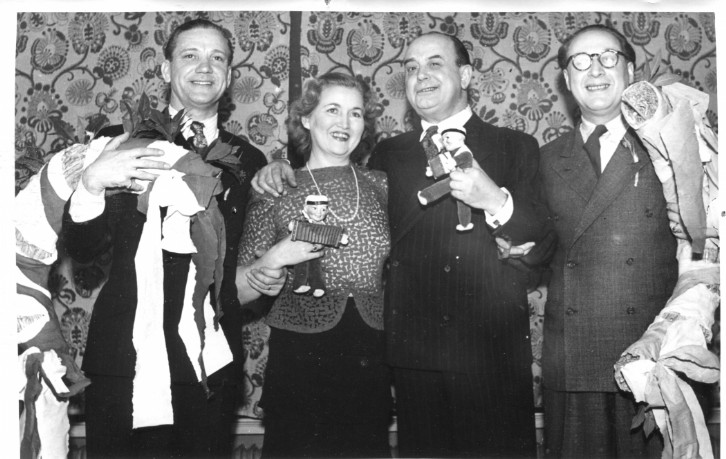 Party with the cast after their
25 year anniversary performance. 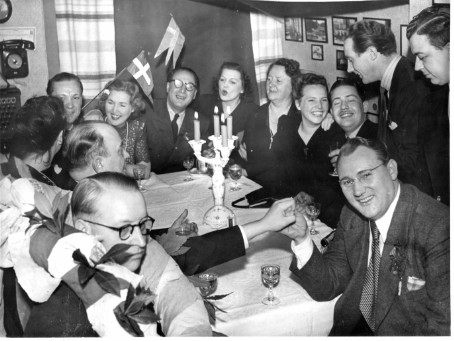 Gellin & Borgstrom  Anniversary
The two Accordionvirtuosos', Gellin and Borgstrøms 25 year anniversary was celebrated in the "Kilden", , and there was no doubt that they received proof of how popular they are in .
The first half of the Musketeer Show proceeded as usual, but in the second half, the two performers  were paid homage to as for a gold medal. It began when Ellen Løjmar  gave a short message of the anniversary, and then the two celebrants came on stage, greeted by strong applause,  and played their success melody - The overture -Orpheus in the Underworld-. Then came director Hans Jørgen Petersen on stage where he congratulated the two celebrants, whom he characterized as an important part of 's entertainment scene, and as he handed them a beautiful souvenir he also gave notice that he had been able to prolong the Muskateer Show for rest of the month.
Immediately afterwards came a deputation consisting of Borge Kertes Orchestra dressed in high hats and mustaches with Alez Zander in front  in order to bring them their congratulations. He read out a festive greeting from - Bælum Sympatiorkester- and handed them a laurel wreath in Swedish and Danish colors. Since it was impossible to get the laurel wreath to cover both of them,  Zander tore it resolutely in  half and gave them each his part, Gellin the Swedish and Borgstrøm the Danish.
Several truckloads of flowers had been sent to the two popular performers and the audience paid tribute to them with an applause that was about to lift the roof of  the establishment.
Ernst Borgstrøm 50 years old.

July 31 1950, Ernst Borgstrøm celebrated his 50th birthday. Midmorning, from our house, we could hear music in the distance which became louder and louder. When we went to the front of our house we saw an orchestra marching down the street towards us. Turned out that numerous  musicians that over the years had played with Ernst had decided to honour him the best way they could. Naturally, it turned into an all day party at the house and it did not take our neighbors long to join in the festivities. The party continued after their performance at Cirkusrevyen that night. Picture below show the showgirls carrying Ernst. 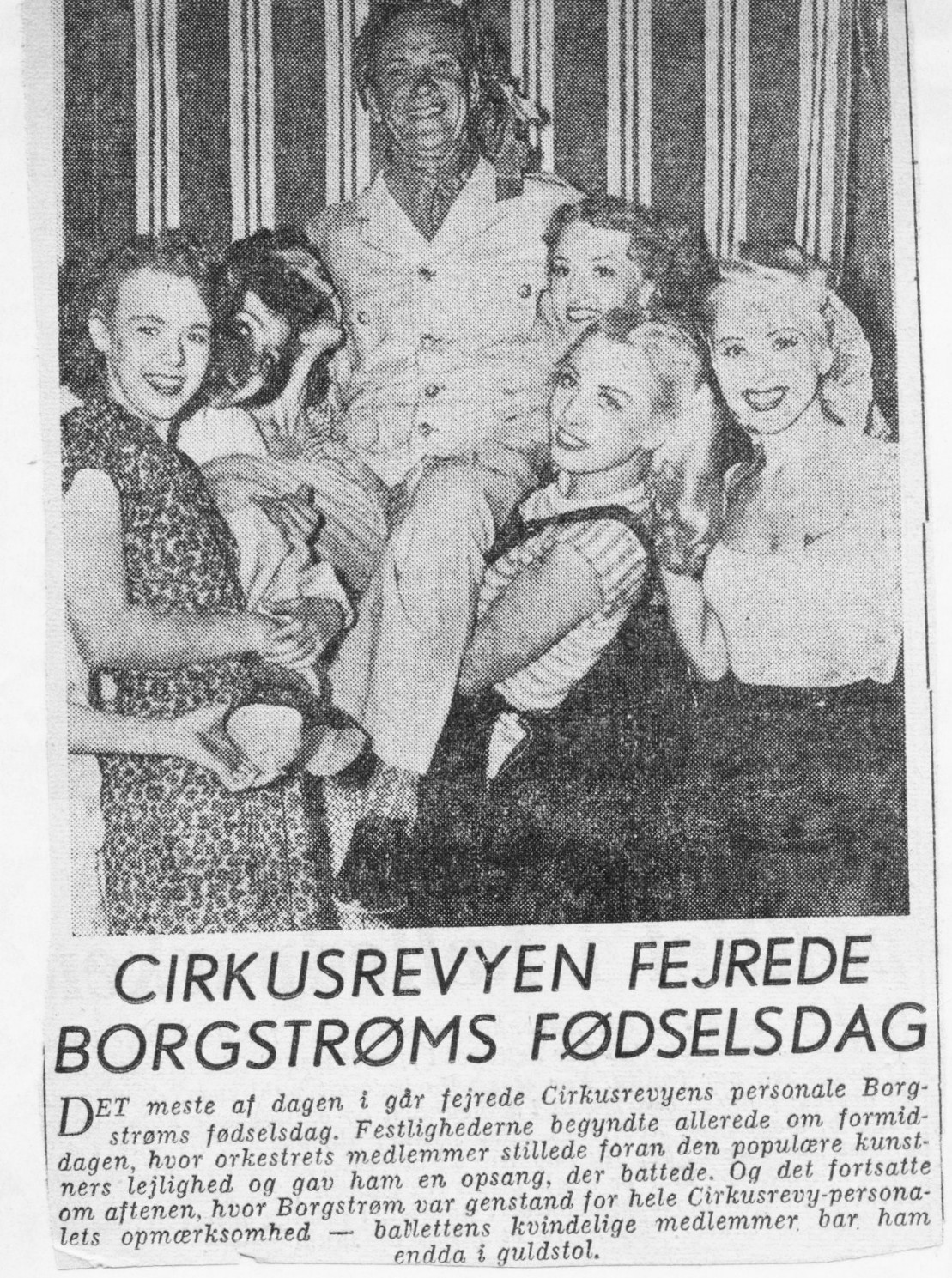 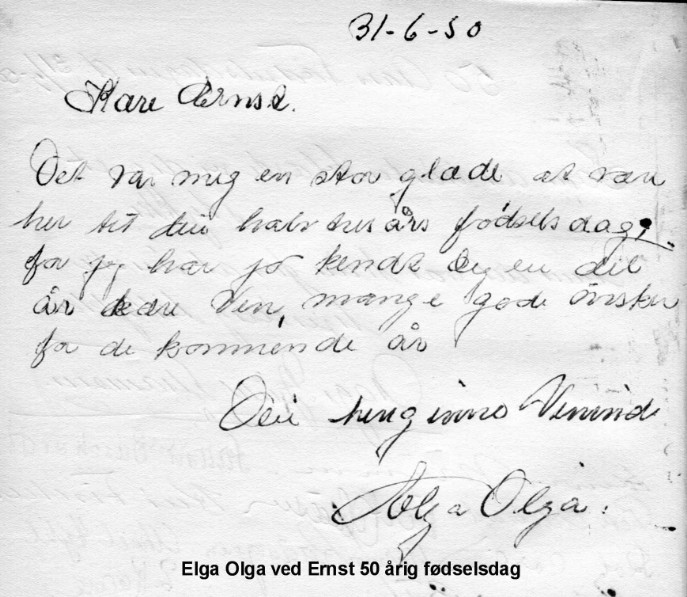 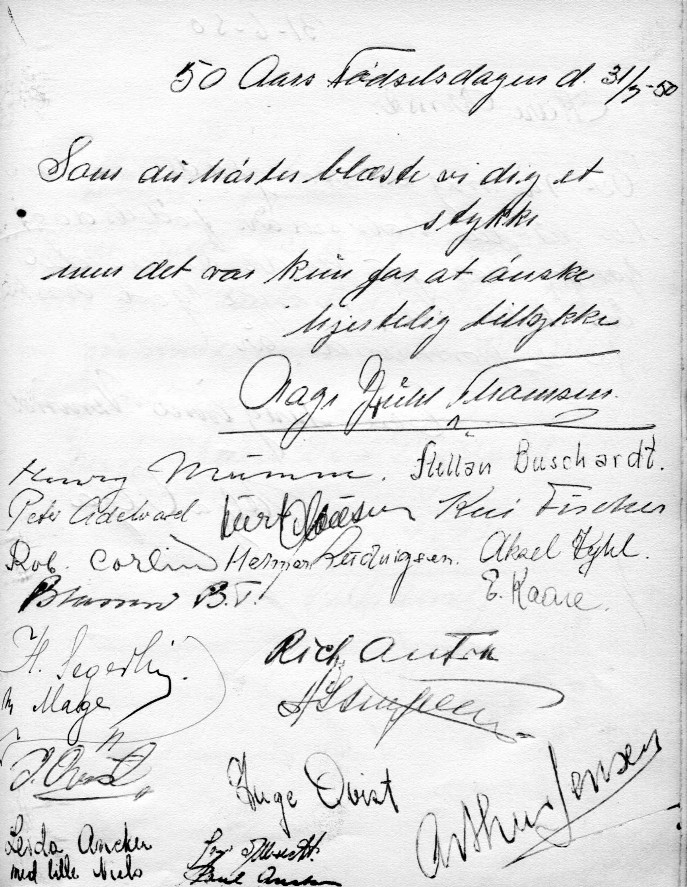 Most of  yesterday the staff of Cirkusrevyen celebrated  Borgstrøm's birthday. The festivities began in the morning when orchestras members stood in front of the popular artist's house and gave him performance that rattled.. And it continued into the evening where Borgstrøm was the subject of the entire Circus Revue -personales attention - ballet female members carried him even in the golden chair.

Borgstrøm is fifty
In the evening there will be a double celebration in Oscar Holst's Circus Revue, which might otherwise seem festive enough for everyday, but one of its most popular forces, Accordion virtuoso Ernst Borgstrøm, will be  fifty, and on that occasion he will  be celebrated -
The audience that he over the years has made to faithful followers, and the hearty applause as soon as he presses the buttons and let the music roar--
His comrades knows what an excellent a guy he is - Loyal, helpful and always easy to deal with, and of course most of all Gellin, his Siamese accordion Twins.  In the evenings  Borgstrøm carried the load, and Gellin took care of the business,  looking  into the audience in order to figure out how many people had come, and how much it gave.
Gellin met Borgstrøm 33 years ago, and they became a pair, inseparable.. Together they had written numerous chapters of the popular Volume of Denmark's entertainment history. They have played a lot of good music and they provided healthy musicals mood on stages and platforms, and yet still they can carry  a finale and get the house pounding with excitement.
It will happen tonight when Borgstrøm for once must have a solo curtain call. He deserves it as few does.
. 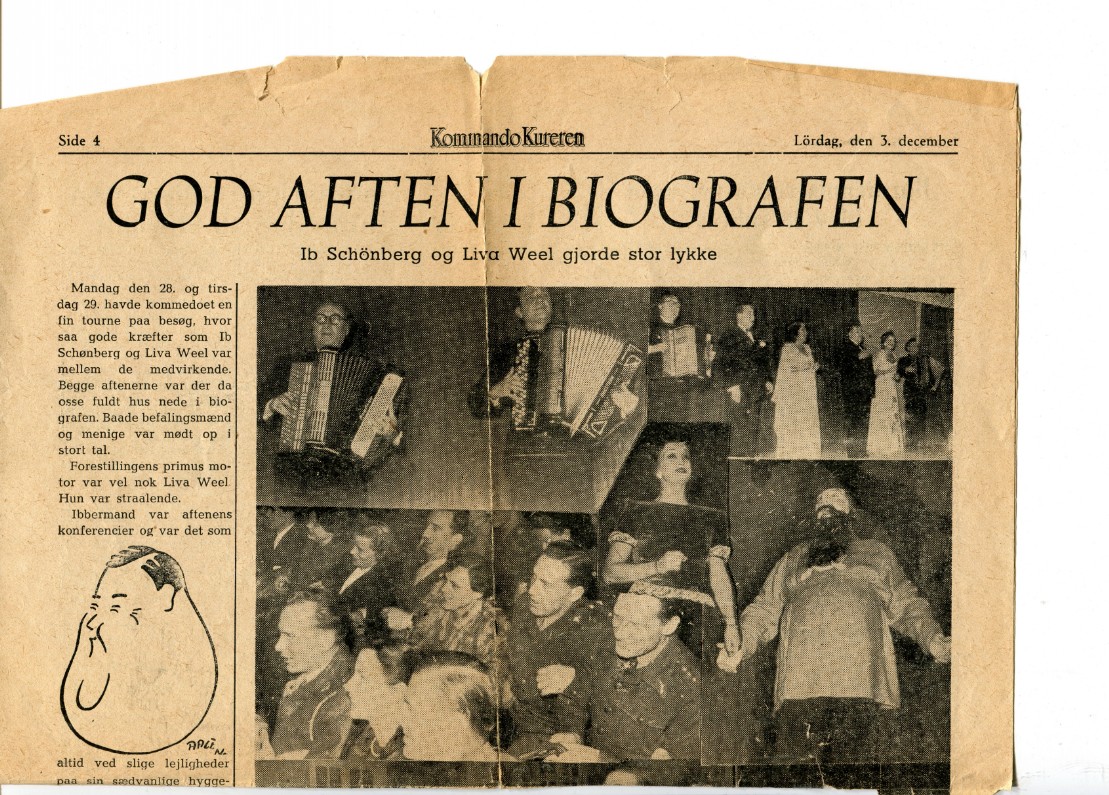 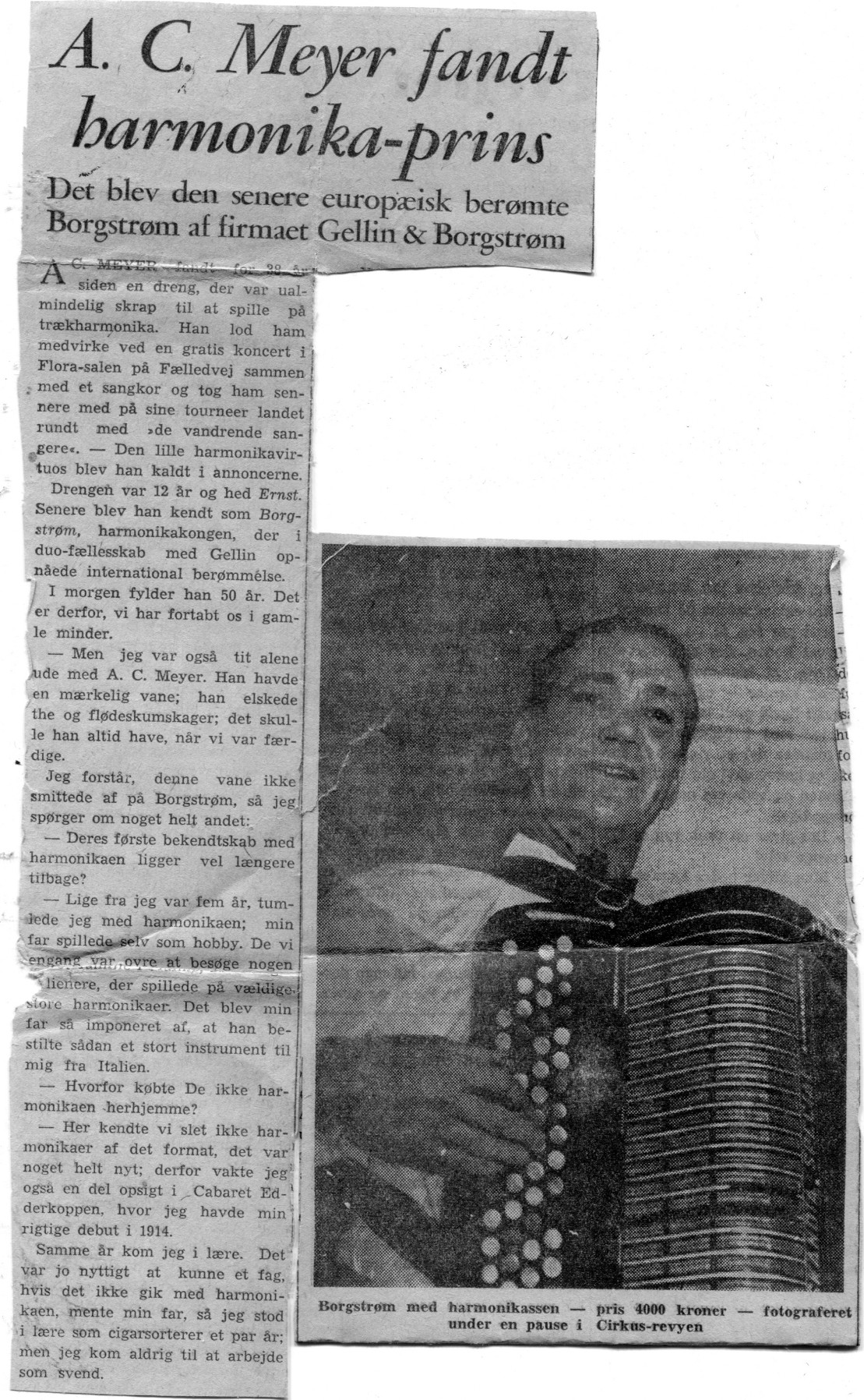 Ernst Borgstrøm presents his elite accordion student at a concert. 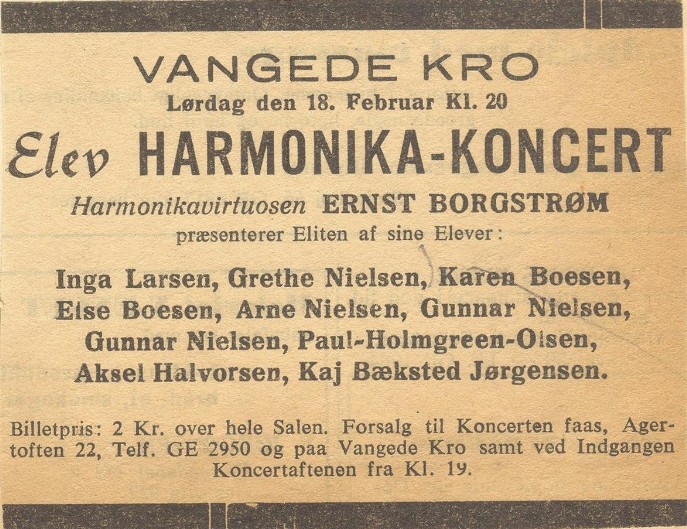